‘La Diada’ or how Catalonia commemorates its defeat 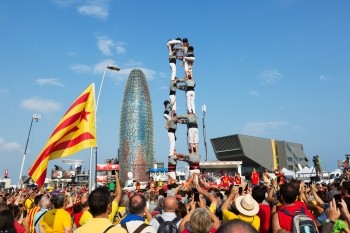 On September  11th, Catalonia celebrates its national day and it is an interesting opportunity to find accommodation in Barcelona and experience the city like a local. Cultural and political events all over the city commemorate the defeat of Catalonia in the War of Spanish Succession.

Since 2001 the international community annually commemorates the 9/11 attacks on the 11th of September. However, what most people are not aware of is that on the exact same date since 1980 Catalonia officially celebrates its national day, popularly known as ‘La Diada’. Eevery year on the 11th of September the capital of Catalonia, Barcelona, hosts a wide range of events related to the National Day of Catalonia and it is therefore an interesting opportunity for tourists to rent an apartment in Barcelona and get to know the city’s traditions like a local. If you are looking for a holiday apartment in Barcelona, do not hesitate to visit the city on this remarkable date and get to discover from a first-hand experience cultural events and demonstrations commemorating ´La Diada´.

National days around the world normally celebrate a liberation or a triumph of the nation, but on the contrary, on the 11th of September Catalonia commemorates its defeat in the War of the Spanish Succession. The death of the king Charles II, last member of the Habsburg’s dynasty or House of Austria, without descent set the start of this conflict. The two main opponents in the Spanish Succession War were the troops of the Crown of Castilla, who supported a Borbon king originally from France appointed by Charles II as the successor, against the troops of the Crown of Aragon, including Catalonia, who were in favour of maintaining the House of Austria in power.

The conflict lasted for 13 years and on the 11th of September of 1714 after 14 months of siege in Barcelona, the last Catalan troops were finally defeated by the army of Borbon king Philip V of Spain. The main immediate consequences of the Treaty of Utrecht, signed to finalise the war, were the loss of the European territories, such as the Spanish Netherlands, Sardinia, Minorca or Gibraltar, and the suppression of the Crown of Aragon, which meant the end of the federal monarchy model developed by the former Habsburg´s dynasty. With Philip V of Spain in power, the Nueva Planta decrees were imposed, which abolished the Catalan constitutions and forbid the use of any language other than Spanish, such as Catalan.

One century after, the holiday was first celebrated on the 11th of September of 1886 nearby the Fossar de les Moreres memorial in El Born in Barcelona honouring the dead martyrs during the conflict. Years later, Franco’s dictatorship suppressed the celebration of ‘La Diada’, which was later reinstated in 1980 by the Government of Catalonia. Since then, several organisations and political parties traditionally offer flowers to the monuments of the leaders of the defence of Barcelona during the siege, Rafael Casanova and General Moragues.

In the last years, coinciding with the rise of pro-secessionist claims in Catalonia, civil organisations and political parties favouring the independence of the region have organised massive pro-independence demonstrations in the streets of Barcelona. Thus, if you find yourself surrounded by citizens wearing ‘estelades’ and ‘senyeres’ on the 11th of September now you will know what they are celebrating.