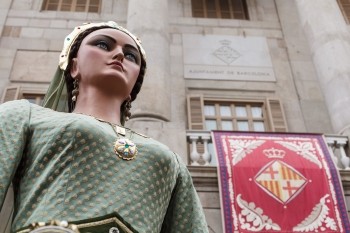 Every year as the end of September approaches, all Barcelona locals are looking forward to the same celebration: La Mercè. From the 18th to the 24th of September, Barcelona will host a wide range of traditional events across the city, from human castles to concerts and fireworks.

From the 18th to the 24th of September Barcelona will host its probably most important local festivity: La Mercè. If you are staying in an apartment in Barcelona around those dates, do not miss the traditional Catalan atmosphere of this celebration. But what does the city exactly commemorate at the end of September? The legend says that in 1687 Barcelona suffered a plague of locusts and placed its fate in the hands of the Virgin of La Mercè. Once the city overcome the plague, the Council of Barcelona named La Mercè patron saint of Barcelona. After Pope Pius IX ratified the decision, Barcelona started celebrating this festival in September, but the celebration was first officially held in 1902.

However, before La Mercè, Barcelona already had a patron saint of the city: Santa Eulàlia. That is why popular voices say it usually rains during the celebration days of La Mercè. Santa Eulàlia cries because its citizens have forgotten about her existence.

The Spanish Civil War and Franco’s dictatorship were a stumbling block for the celebration to take place, but with the establishment of democracy and thanks to the active engagement of cultural and societal local organisations, La Mercè became a truly popular festival. Nowadays, the celebration includes in its programme a large amount of street traditional events bringing together people from all age groups.

Some of the events you should not miss are the visual projections on the façade of the City Hall of Barcelona, the gegants’ exhibition and dances, the correfoc, the human castles, the sardana dances and the fireworks annually closing La Mercè. Furthermore, every night there are concerts from a wide range of music genres at Avinguda Reina Maria Cristina, Plaça Joan Coromines, El Parc del Fòrum, el Moll de la Fusta, Avinguda de la Catedral, Parc de la Ciutadella, among other locations.

For more information in detail about the events taking place during the festivity, please check the official website of La Mercè 2015: http://lameva.barcelona.cat/merce/en

For the moment, the weather forecast appears positive this year for the end of September. Perhaps Santa Eulàlia has forgiven her competitor. We wish you an enjoyable La Mercè 2015!