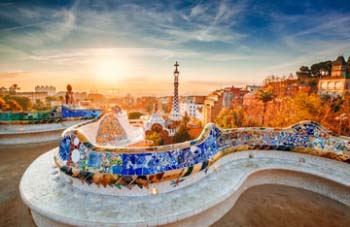 Born in Reus on June 25, 1852, the architect Antoni Gaudí i Cornet spent much of his life in Barcelona, city in which he died on June 10, 1926, leaving unfinished one of his great works: The “Sagrada Familia” Holy Temple.
Luckily, he succeeded to complete many other ones that we encourage you to visit in a one or two day tour of the city.
This is the full route of Gaudi’s works in Barcelona.
Gaudí's route through Barcelona
To organize your visit easily, you just have to follow the order of the list that you will find below or, if you prefer to create your own tour, consult the map that we have prepared especially for you.
Staying at Fisa Rentals apartments in the center of Barcelona, you can easily reach the starting point on foot:
1. We start the route at Casa Batlló on Paseo de Gracia. Built between 1904 and 1907, this house is one of the maximum expressions of Catalan modernism, as well as others that are located between the Aragó street and Consell de Cent street. The area, in fact, is known as "the Apple of Discord", since among the architects of the different buildings there was a manifest rivalry. Among others: Gaudí, Domènech i Montaner and Puig i Cadafalch.
2. Staying in Paseo de Gracia, 500 meters up the road you will find Casa Milá, popularly known as "La Pedrera". A masterpiece coined by the citizens of the time who did not know how to appreciate the undulating forms of the façade and that today endures to refer to one of the architectural gems both of the city and the world.
3. The triad of the first part of this route is completed with a visit to the Basilica of La Sagrada Familia, so famous that today it is already one of the most representative images of Barcelona. Gaudí, welcomed this project in 1883 at the age of 31 years and continued working on it all his life. However, it was such a complex project, that when Gaudí was killed by a tramway at the age of 73, only one of the 18 projected towers had been built.
Now, we recommend you go towards the north of the city, to see the legacy of the architect furthest from the center (although not less crowded).
In 1978, Gaudí met Eusebi Güell, a businessman and wealthy politician who would become his close friend and one of his main patrons. Under his order he made the following works from the list.
4. Located at the foot of the Collserola mountain, in the upper part of Barcelona, the Parc Güell and its small mosaic dragon guard the city. Early in the morning, the walk in the park is especially pleasant. Prepare the camera because you will have great views!
5. For Eusebi Güell, Gaudí also designed: the pavilions and the impressive forged iron entrance door of Finca Güell, located next to the Pedralbes Palace; the Güell Palace, which is on carrer Nou de la Rambla, and the crypt of the Colonia Güell church, on the outskirts of the city.
If you have more time, these are some of the other Gaudí icons that you can see in Barcelona:
6. The impressive Casa Calvet, between Plaza Universitat and Arc de Triomf, so you are likely to pass unintentionally while sightseeing. Now you know that it is also the fruit of the acclaimed author of the Sagrada Familia.
7. The Casa Vicens. You can visit it while you enter the Gracia neighborhood with all its bars and restaurants. Highly recommended.
8. Finally, in the neighborhood of Sarriá (where you can stop to have the legendary patatas bravas at Tomás bar) is the little known Colegio de las Teresianas. An educational center, still active today that was also designed by Antoni Gaudí i Conet.
The route of modernism
The imitation of nature in the architecture so characteristic of Gaudí and the Europe of the late nineteenth century, was experienced very intensely in Catalonia.
If you want to know more about this movement, do not miss our modernism route in Barcelona.
Gaudí in Reus
Originally from this city of Tarragona, Gaudí left a great legacy in Reus, which is also the birthplace of vermouth. If you are interested you can go and return in a day from Barcelona. At the tourist information point they will give a map with all the information you need.
From the Fisa Rentals apartments we recommend you also read the article about the best beaches around Barcelona.
Back to list