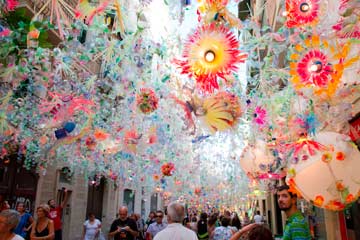 The Gracia street festival is one of the highlights of the August in Barcelona. In this guide you will find everything you need to know to understand and enjoy it to the fullest.

The neighborhood of Gracia

Formerly the city of Barcelona was reduced to what is now the center. All around, there was countryside and, then, scattered everywhere. The towns that are now the neighborhoods of Les Corts, Sants, Sant Andreu ... and also Gracia.

Of all of them, over time, it is the last one that has become one of the most charismatic and bohemian areas of the city, with hundreds of restoration proposals and countless local design and fashion stores.

The Gràcia street festival is celebrated in mid-August. Take notice of the following information:

How to get to the Fiestas de Gracia

The neighborhood of Gracia is very well connected with the metro green line L3 (Fontana) and yellow line L4 (Joanic). It can also be reached walking from Diagonal (green lines L3 and blue line L5).

Program
One of the most characteristic events of the program of the festivities is the decorated streets and squares contest. The decorations are made by hand by the neighbors who come up every year with more spectacular ideas.
The different commissions of the festival take this competition very seriously so they keep the secret throughout the year. It is these entities that also manage the program of activities in their respective spaces.

These are some of the usual activities of the program:

• Public reading of the starting of the festival.
• Contest of squares and decorated streets. On an individual basis, neighbors can also participate in the balcony contest. You can vote for your favorites through the official APP.
• Concerts and live music for all audiences.
• Castells(or human towers, a centenary practice and deeply rooted in Catalonia).
• Correfocs(or pyrotechnics show with devils and drummers).
• Cercavila (or parade of giants and big heads accompanied by music).
• Children’s games.
• Open air cinema.
• Food and popular dinners.

In parallel, alternative parties also take place, with an agenda of their own activities.

Where to stay during the Gracia street festival

At Fisa Rentals apartments located in the center of Barcelona, ​​you can get easily closer to the festivities of Gracia.
You can also get there by metro, 3 stops from Plaza Cataluña or 2 from Paseo de Gracia.

Here you can find more information about our short-term and long-term rentals.

The first record of the “Fiestas de Gracia” date back to 1817. Then the so-called Vila de Gracia was a small agricultural town that celebrated on May 15th the festival of San Isidro, patron saint of farmers.
As the town grew, the work profile of the inhabitants expanded: artisans, merchants, workers ... and, therefore, they decided to change the date of the celebration to August 15th.

During the festival of Gracia there is no better advice than having fun, but it is important to respect the decorations that the neighbors have taken so long to prepare.
Likewise, it is a good idea to bring fresh clothes and a fan to overcome the heat of August in Barcelona in addition to the inevitable in the large agglomerations.
If you want to see the decorations in all their splendor, organize the visit during the first days of the festival and, preferably, in the morning.

Other Barcelona summer festivals
In summer there are also other parties in Barcelona that you cannot miss.

It is like the little brother of the Gracia festival, with less fame but much more authentic. The streets also decorate them and although you can tell they do not have that much budget, ingenuity does wonders.

When? From August 17 to 25
How to get? With the blue lines L5 and green L3 of the subway (Estació de Sants) or red L1 and blue L5 (Plaza de Sants).
From the Fisa Rentals apartments in Marqués de Sentmenat you will be a comfortable walk from the center of the entertainment.

When? From September 20 to 24
How to get? The party is celebrated throughout the city although most concerts take place in the center.
Activities that you cannot miss: In addition to the concerts, one of the star activities is the Piromusical with which the celebrations are closed at the famous Montjuic Fountain in Plaza España.