Over there it’s called Halloween, over here the “Castanyada” 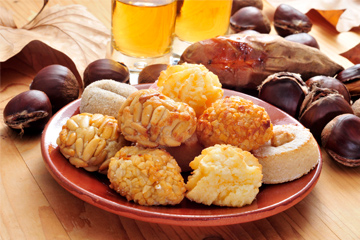 While Anglo-Saxon countries celebrate Halloween on October 31st, Catalonia has its own popular festival. We tell you all about this peculiar tradition.

Catalonia celebrates the Castanyada on October 31st. We encourage you to spend that day in Barcelona with all the comfort of Fisa Rentals apartments.

Origin of the Castanyada

Like Halloween or the Celtic Samhain, the origins of the Castanyada are found in the rites that were carried out the day before All Saints' Day, also known as the Day of the Dead or the Dead.

More specifically, the legend says that the tradition of eating these highly energetic products the night before All Saints comes from when the bellmen had to work all night in the churches to warn the residents of the town of the hour of prayer for the dead people. Due to the exhaustion caused by the activity of ringing the bells all night, the bells ate chestnuts and sweet wine to regain strength.

At the end of the 18th century, the tradition of eating chestnuts around these dates spread throughout Catalonia. This is how the figure of the ‘castañeras’ emerged. These were street vendors of chestnuts, usually women of a certain age, modestly dressed in peasant clothes and with a headscarf. While the figure of the ‘castañeras’ no longer exists as such, many traditional songs learned by children at school still remember them as they were. In fact, La Castanyada is the first of the four main parties in Catalan schools, along with Christmas, Carnestoltes (Carnival) and Sant Jordi.

Although the story chestnuts, - bent over the years, with their heads half covered and half socks up -, are a thing of the past, the stalls selling chestnuts and sweet potatoes flood the city of Barcelona every autumn celebrating the arrival of the cold .

Chestnuts are ordered by dozens, and sweet potatoes by units. The two are served wrapped in newspaper wrapped around himself and known as 'paperina'.

During this time, it is also common for children to learn to make their own panellets at school, which they will later eat with their family for dinner. In fact, La Castanyada is the first of the four main parties in Catalan schools, along with Christmas, Carnestoltes (Carnival) and Sant Jordi.

These are some of the outstanding plans to celebrate the Castanyada in Barcelona this 2022:

The day after La Castanyada, Catalans celebrate All Saints' Day, as do most countries with traditionally Christian culture. Given the occasion, you can take the opportunity to visit the historical cemetery of Montjuïc for free: click here for more information