“La Mercè” 2019. Program to live Barcelona’s festivities as a local. 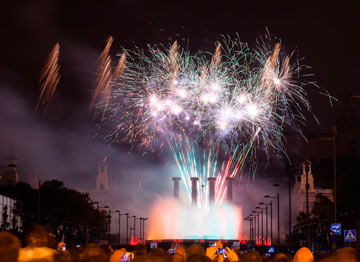 The “Festes de la Mercè”, or “Fiestas de La Mercè” in Spanish, is the commemoration of the day of the patroness of Barcelona and a celebration in style.
At Fisa Rentals Apartments Barcelona, we give you the programme so that you can enjoy the activities organized throughout the city as a local.

Dates. Note it down on the diary: this year 2019 the biggest parties in Barcelona will take place from Friday, September 20th to Tuesday 24th.

“La Mercè”, called in Spanish “Virgen de la Merced” (Virgin of la Merced) or “Nuestra Señora de las Mercedes”, has been linked to the history of Barcelona since September 24th, 1218, as she appeared to King Jaime I, St. Pere Nolasc and St. Ramon de Penyafort and were asked simultaneously to establish a religious order to rescue captive Christians in Saracen lands.
With that miracle in their minds, centuries later, in 1678, the Consell de Cent of Barcelona promised to appoint Mare de Déu de la Mercè patron of the city if it freed them from a terrible locust plague.
So that the way it went and the people from Barcelona also did their part, even if it was much later, in 1868, when they finally proclaimed the Mercè co-patron of the city. A title that, until then, Santa Eulàlia had held alone, the girl who lost her life for the Christian faith in Roman times miraculously resisting several martyrdoms.

The Mercè festival program has always some very special activities. These are as follows:
- The Pregón (kick-off of the festivities). Which this 2019 will be in charge of Manuela Carmena, the former mayor of Madrid.
- Correfuegos (Fireruns) and Giants and Bigheads. Festive parades for all audiences.
- Castells or human towers with a lot of tradition in Catalonia.
- Videomaping on the facade of Barcelona’s City Hall on Sant Jaume’s square.
- Activities in the Ciudatella Park for children and adults with music, games, performances ...
- Circus in the Montjuic Castle. A great opportunity to live a different holiday.
- Invited city. Every year Barcelona invites a city in the world to participate in the Mercè celebration highlighting its culture: artists, musicians, traditions .... This 2019 is Beirut, the capital of Lebanon.
- Cursa de la Mercè. It is usually held just after the festivities to cut traffic without interfering with other activities. It is a very popular race in the city with a distance of 10 kilometers that can be done both running and walking. So, in addition to athletes, groups of families and friends participate with a much more playful spirit.

The concerts are, without any doubt, the highlight of the Mercè festivities. So much so that there are two extensive completely free programming in parallel: that of the BAM Festival and that of Mercè Music.

• BAM Festival. Barcelona Acció Musical stands for the acronym BAM for, a festival with more than 25 years of history and with the objective discover emerging talents of dance, electronic, rock or pop music from Catalonia and the world. In each edition about 40 concerts are programmed simultaneously in several stages: Parc del Fòrum, Antiga Fàbrica Damm, Plaça Reial, Plaça de Catalunya, Plaça dels Àngels ...

• Mercè Music. All the concerts that are not part of the BAM and that are distributed literally throughout the city are grouped here. It is noteworthy that of the more than 130 scheduled performances, there are many daytime and specially ones designed for a family audience.

Pyromusical
Another of the essentials of the Festes de la Mercè is the pyromusical in the Magic Fountain of Montjuic in Plaza de España. A spectacular choreography of music, water and fireworks that closes festivities every year.
During the previous days, other pyrotechnics shows are also scheduled between the beaches of San Miquel and Somorrostro in Barcelona.

What is the weather like in Mercè?
As the it is held during the last weeks of September, it usually rains during the Mercè festival. However this fact has a much more mystical explanation. And it is that the city's copatroness, Santa Eulalia, cries because the citizens of Barcelona have forgotten about it.
The celebrations of Santa Eulalia take place in mid-February, but with much less hype.

Where to stay during the Fiestas de la Mercè 2019?
The events of La Mercè are spread throughout the city, so at Fisa Rentals apartments located in the city center you will be perfectly connected, being able to comfortably walk to most scheduled activities.

Remember that cancellation is free until 24 hours before the day of arrival whenever you book from our official website and with the exception of some special events such as the MWC or Christmas Eve.