Modernist route through Barcelona. The 12 Essentials. 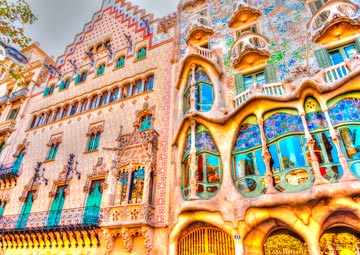 Gaudí is certainly one of the most well-known representatives of Catalan modernism in the world, but there are many other architectural gems of this movement that you cannot miss.

If you want to discover them, we have prepared this modernist route through Barcelona with a map so that it is very easy to orientate yourself and plan the day.

What is the route of modernism?

Following the points marked on this modernist route through Barcelona, ​​you will discover the works and artists most representative of this trend in the city.

What is modernism? The taste for the forms of nature that invaded all Europe in the late nineteenth century and in Catalonia was experienced in a very special way under the eyes of geniuses such as Gaudí, Puig i Cadafalch or Lluis Domènech i Montaner, among others.

The Route of Modernism in Barcelona Map

In this map you can see all the stops of the key points of modernism in Barcelona that we will discuss later. Thus, you can convert yourself very easily into your own guide:

You will see that all Gaudí's works are marked in yellow.

The Modernist Route in Barcelona. The most famous monuments.

If you only have one day, the essentials of modernism in Barcelona are the following:

Sagrada Familia, Casa Milà or Pedrera, Casa Batlló and Park Güell. These are 4 works by Antonio Gaudí. The first three are pretty close from each other in the center of the city and very close to almost all the Fisa Rentals apartments in Barcelona. To go to Güell Park it is better to dedicate a morning or an afternoon to walk it calmly.

1. Sagrada Familia. If France has the Eiffel Tower, the Sagrada Familia church is one of the most representative monuments of the city. It is a Catholic basilica that began to be built in 1882 and is still under construction. In fact, the Catalans, when something is very difficult or takes a long time, joke that "you are building the Sagrada Familia". It is declared a World Heritage Site by UNESCO.

2. Near La Sagrada Familia you can also take the opportunity to see the Hospital de Sant Pau, by Lluís Domènech i Montaner, built between 1902 and 1930.

3. The Casa Milà or "Pedrera" was the last civil work of Gaudí, built between 1906 and 1912 and located in Paseo de Gracia, among some of the most luxurious shops in the city. It was commissioned by the Milà family, who lived on the ground floor. It should be noted that although its prestige is currently international, at the time it was not very well received among the locals because of its stone façade, which was too innovative for the time, and which earned it the derogatory name of "La Pedrera". It is declared a World Heritage Site by UNESCO.

4. Casa Batlló. Built between 1904 and 1906 by order of Josep Batlló, a textile entrepreneur married to a member of the Godó family, another of the most important families in Catalonia. The façade is full of color and forms reminiscent of the sea and the bones. Each window is of a different height as a system to regulate the light that entered the building. It is also on Passeig de Gracia, very close to "La Pedrera", also made by Antoni Gaudí, and is another very representative examples of Catalan modernism that make up the "Apple of Discord ".

5, 6, 7 and 8. What is the “Apple of Discord”? In the city block of Paseo de Gracia crossing Aragó street and Consell de Cent streets - called "manzana" in Spanish is, in addition to a fruit, an urban space delimited by streets on all sides - there are 5 masterpieces of Catalan modernism, from 5 different authors. They compete professionally with each other. For that reason, this zone, happened to be called the "Apple of the Discord", in reference to the clear rivalry to make a work more popular than the others.
It’s made of the foolowing 5 buildings:

9. Parc Güell. "Parc" is the Catalan word for "park". And that is the "Parc Güell", a huge park with beautiful and undulating architectural elements reminiscent of the sea and the forest, mimicking the environment. Eusebi Güell, passionate about the works of Gaudí, was the main sponsor who allowed the complex to open its doors to the public in the mid-1920s. What you cannot miss is the salamander that stands out on the park's staircase. Be aware also of the small pieces of ceramics and colored glass joined together as in a mosaic, this technique in Catalonia was known as "trencadís" and is very typical of Gaudí's works.
All this large garden is a World Heritage Site by UNESCO.

Beyond Gaudí, Domènech i Montaner and Josep Puig i Cadafalch are other of the great names of Catalan modernism. If you want to know more about them this is what you have to see:

10. Palau de la Musica Catalana. Built between 1905 and 1908 by Lluís Domènech i Montaner it works as an auditorium and concert hall, so you can take advantage of the visit to see live music. The exterior is spectacular but it is worth entering inside.

11. In addition to being a very good example of Catalan modernism, the building situated in Montsió street nº3 designed by Josep Puig i Cadafalch in 1896 has the incentive of housing the Els Quatre Gats tavern in the ground floor that was frequented by artists such as Picasso. Today is a restaurant where you can eat a great half-day menu for less than 20 euros (Catalan and Mediterranean cuisine).

12. The Casa Terradas - Casa de les Punxes is undoubtedly one of the most emblematic monuments of Barcelona more​ ​unknown of tourists. Declared a National Monument of National Interest and built by the architect Josep Puig i Cadafalch. It will not leave you indifferent.