New Year's Eve in Barcelona: what to do? 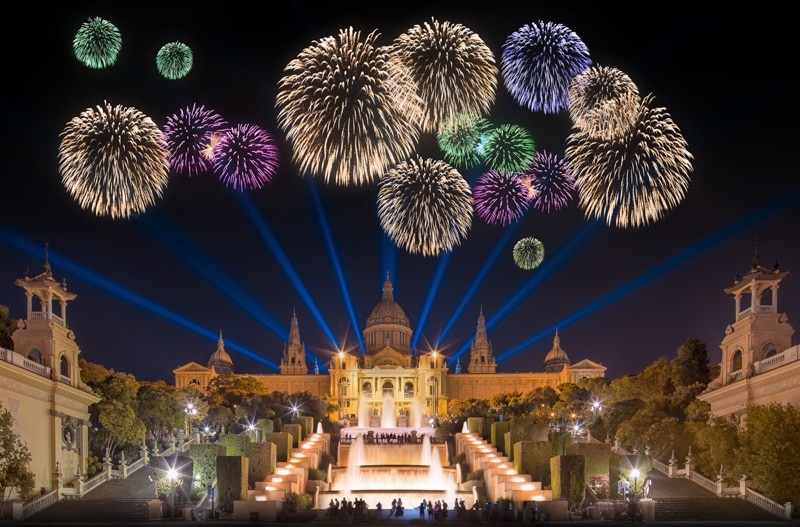 Barcelona is a city with a wide variety of cultural and leisure activities throughout the year, and even more on special dates like New Year's Eve. If you are planning on to spend December 31st in the city, we tell you what to do this New Year's Eve in Barcelona; with children, as a couple, with friends... Here is everything you cannot miss.

What to do for New Year's Eve in Barcelona: some customs that you should keep in mind

At the end of the year, people from Barcelona usually dine with family or friends. So, it is after taking the grapes at midnight, when most parties start.

As in the rest of Spain, the customs also go by wearing red underwear, to toast with some gold inside the glass of cava or to write a list of wishes, but there are other very particular customs that without a doubt you should sign up if you are going to spend New Year's Eve in Barcelona for the first time:

1. L'Home dels Nassos. It means "the man with the noses", a character that can only be seen on the last day of the year. The children are told that they have to look for a man with as many noses as there are days left, which causes many to get confused and look for a monster with 365 noses when in fact it only has one (and therefore it can be anyone!). Around this story are celebrated with music and entertainment in different Catalan towns. In Barcelona, ​​the most famous is Pla de Palau.

2. The "L'Home dels Nassos" run. While in other regions the "Cursa de San Silvestre" has been popularized in Barcelona, ​​the last race of the year is devoted to that special man who has only one nose. It is a 10-kilometer route with departure and arrival on Selva de Mar Street, near the Olympic Port. The circuit starts at 5:30 p.m., so that attendees have plenty of time to change before celebrating New Year's Eve as it deserves.

3. The party at Plaza España. Following in the footsteps of other European capitals that have popularized their own celebration of New Year's Eve on the street, such as Madrid with the Puerta del Sol or Paris with the Eiffel Tower, the Barcelona City Council has been organizing a party on Maria Cristina Avenue for a few years now. Plaza España, to play the famous Magic Fountains of Montjuic. The show, with pyrotechnics and music, will begin at 9:30 p.m. and will last until after 24 h.

There are many places that prepare a special party for New Year’s Eve, some with dinner included and others only after the 12 strokes.

Prices range from 20 euros to 400 euros on average per person, so there is no lack of variety.

The parties with views are famous, from the area of Montjuic, and also those of all the clubs located near the sea. If you go with children, you can look for celebrations with shows and activities for the little ones. There is one for every taste. However, whatever you choose, it is important that you buy tickets well in advance because they tend to run out.

The good news is that the metro runs all night so you will not have transportation problems.

At Fisa Rentals we offer you 40 apartments with all the comfort and an unbeatable location in the heart of the city so you can celebrate the best New Year's Eve in Barcelona.

If you book through our official website you will get some exclusive benefits such as the best price guaranteed and exclusive discounts on activities in Barcelona for being a client of Fisa Rentals. In addition, like all our customers, you will get a welcome pack with everything you need in your first days for both cooking and cleaning.

We invite you to discover a new way of traveling with the comfort of feeling at home and to ask ourselves everything you need to know to spend an unforgettable New Year's Eve in one of the most vibrant cities in Europe.