You are not the only one visiting Catalonia 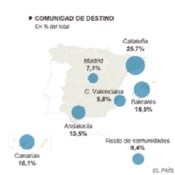 If you are renting an apartment in Barcelona and you think you are rather original, you should know you are not the only one visiting the city. Catalonia is the region that has received the largest amount of tourists this year, accounting for 25.7% of the tourists visiting Spain.

47.2 million foreign tourists visited Spain in the first eight months of 2015, a 4.1% more than the tourists coming to the country in the same period in 2014 breaking an all-time-record, according to the latest data made available by the survey Frontur, endorsed by the Ministry of Industry, Energy and Tourism. Considering these numbers, 5.5 million tourists stay in rental apartments. Visitors from Britain, France and Germany made up more than half of the foreign entries into Spain.
If we take a deeper look at this data, Catalonia was the region that accounted for the highest percentage of international tourists receiving 25.7% of the total of visitors, followed by the Balearic Islands (18.5%), the Canary Islands (16.1%) and Andalucía (13.5%). In total, more than 12.11 million of foreigners visited Catalonia from January to August.

Barcelona and the Costa Brava are the main tourist attractions in Catalonia. However, the Catalan Minister of Enterprise Felip Puig and the Catalan Minister of Territory and Sustainability presented last summer a plan aiming to promote ecotourism in other areas of Catalonia. For this purpose, the Catalan government will invest this year 500,000 euros to this project.
Interestingly enough, the airport of Barcelona-El Prat has recently become the European hub leader in terms of low-cost airlines, ahead of international airports, such as John F. Kennedy in New York, Gatwick in London or Indira Gandhi in Delhi, according to the OAG Megahubs Index study. Thereby, El Prat is the only Spanish airport to be placed in the top 25 worldwide leading the European ranking and occupying the 15th position in the world ranking.
If you are a foreigner, you might have heard of the popularity of Catalonia and its capital, but now you can also show off in conversations with some real facts and statistical data.