Wines of Catalonia. All Appellations of origin. 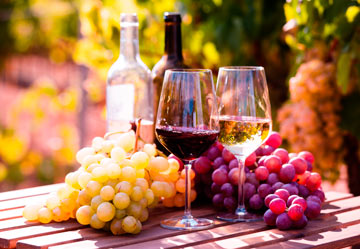 The wines of Catalonia represent approximately a quarter of the total Spanish production. These are all of them 11 Appellations of Origin (A.O), presented in alphabetical order (we include in the list the Catalonian one, created as a group to facilitate international trade):

Appellation of origin. Alella
“Tradition and modernity. Past and future. Field and city. Sea and mountain". This is how this A.O. located in the Maresme, between Barcelona and the Costa Brava. They are now small vineyards but with a long history that goes back to Roman times. In fact, it is said that in the Middle Ages Alella wines were preferred by the nobility. There are white, red and Pink wines, preserving traditional varieties that make them unique

Appellation of origin. Conca de Barberà
Located in Tarragona, the A.O. Conca de Barberà is completely linked to the history of the Monestir de Poblet, one of the most important monastic ensembles in Europe. Among the red ones, the “trepat” native variety stands out, which provides a fruity, soft and good acidity taste. Among the white ones we find the Macabeo and the Parellada so typical in Catalonia.

Appellation of origin. Costers del Segre
7 territories spread along the Segre River are those that form this A.O. in the province of Lleida, the only one completely inland in Catalonia and, consequently, with marked thermal oscillations between day and night and the different seasons of the year. Among white wines, the tradition of Macabeo and Parellada varieties predominates with a light and fruity result. Red ones, on the other hand, have a powerful aroma and a balanced taste.

Appellation of origin. Empordà
Between the Costa Brava and the Pyrenees mountains (Alto and Bajo Empordà) the wines of this A.O. they have all the character of the strong wind in the area known as "la tramuntana". With a history of more than 2000 years, it was through this territory, specifically Empúries, from where the Greeks introduced the trade of viticulture in the peninsula. Their rosés and garnacha wine are usually recommended, ideal for desserts.

Appellation of origin. Montsant
One of the most common in restaurants and with as much force as the well-known Rioja. Integrated by 17 municipalities in the inner part in the center of Tarragona, the A.O. Montsant was born in 2011 selling more than half of its production abroad. He has won countless awards, his red ones and the kosher being applauded especially among the Jews.

Appellation of origin. Penedès
The Penedès is a territory that lies between the provinces of Barcelona and Tarragona, touching the sea on one of its sides. Side. del Penedès dates back to 1960 and is mainly known for having signed some of the best cavas in the world. For a few years now, under this seal they also began to sell sparkling wines that have become very popular.

Appellation of origin. Tarragona
With some vineyards bathed by the sea, others by the Ebro River and all cradled by the mild Mediterranean climate, the vineyards of the A.O. Tarragona (1932) produces “soft and fresh” wines: white (with the native varieties Xarel·lo and Macabeo), reds, rosé, needle, stale, sparkling, mistelas…

Appellation of origin. Terra Alta
The Terra Alta is a region of Catalonia located at the innermost limit of the province of Tarragona, on the border with Aragon. The name, high land in Spanish, refers precisely to the elevation of the land, 400 and 500 meters. Thus, the crops of this D.O. officially created in 1982, they are located on terraces perfectly designed to overcome the unevenness between valleys of difficult access. They are very popular wines in Germany and differ by the use of native varieties of "garnatxa" white and "macabeu" in white wines. They also produce reds and spirits: mistela, natural sweet wine and stale wine, among others.

Appellation of origin. Pla de Bages
With a space of about 500 hectares in the inner center of the province of Barcelona, this designation of origin has as its distinctive "picapoll", a white wine of an unmistakable, light yellow color and of moderate acidity and graduation. With vines surrounded by aromatic plants such as lavender, thyme or rosemary, their other products also have a very unique fruity touch.

Appellation of origin. Priorat
The A.O. Priorat extends at the foot of the Montserrat mountain range, so the vineyards are concave on spectacular slopes saved with hundreds of terraces. It is one of the most traditional wine fields in Catalonia and with some of the most prestigious wineries in the world. They also make kosher wines.

And these 10 appellations of origin of wines of Catalonia have been completed since 1999 with the agglutinator A.O. Catalunya to facilitate export.

At Fisa Rentals apartments located in the center of Barcelonawe suggest you discover them all in the different restaurants of the city or schedule delicious wine trips.

Other excursions that we recommend you: discover the most charming medieval villages in Catalonia or the spots to ski, close to the city.