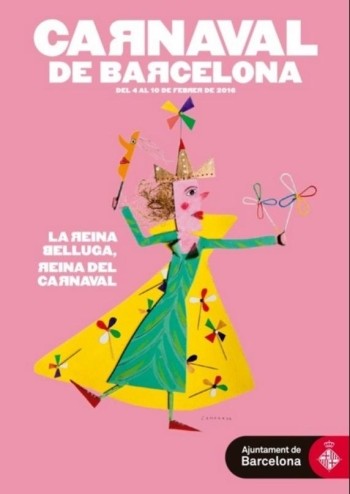 Rio de Janeiro is a city internationally known for its Carnival celebrations as well as other European cities, such as Cologne or Maastricht. In Catalonia, some municipalities like Sitges or Vilanova i la Geltrú are also popular for their acclaimed Carnival festivals, but the capital, Barcelona, also offers a wide range of cultural and social activities around these dates. If you are renting an apartment in Barcelona this week, find out more about what to expect and see in Barcelona from the 4th to the 10th of February.

This year the streets of Barcelona will be in full swing for Carnival from the 4th to the 10th of February. Originally, in Catalan culture, the King Carnival is a fictional character dressed up in a colourful eccentric costume who represents debauchery and transgression and who is supposed to appear in public the first weekend of February coinciding with the start of Carnival. From that weekend on and until Ash Wednesday King Carnival presides over all the parades and celebrations related to Carnival. His life sadly comes to an end on Tuesday evening when he is judged for his bad behaviour and condemned to be burnt alive in a public space, marking the start of the seven weeks of Lent until Easter, characterised by their austerity and abstinence.

While King Carnival has predominantly lost its religious character, the figure is still embedded into Catalan society, with teachers in schools still preparing activities related to the story and local governments still engaging in programmes promoting the arrival of King Carnival to the city. However, nowadays Carnival is mostly, like anywhere in the world, an excuse to dress up with your friends and relatives and celebrate in the streets that winter is almost over.

That is why this year Barcelona offers a programme covering both the cultural and societal aspects of Carnival. On the one hand, not only King Carnival but also Queen Belluga will visit the city from the 4th of February on to ensure a gender balanced tradition. The arrival of the Carnival Kings to the city will be accompanied by fire shows, music and wilderness on the 4th of February, followed by an official introduction to the city on the 5th of February with an elegant costumes and masks dance in El Born Centre Cultural.

The main Carnival event, ‘La Taronjada’, will take place on Sunday 7th of February, when inhabitants are welcomed to dress up their orange clothes and join the colourful concerts and even a flashmob in the neighbourhood of El Born.

Apart from this landmark events, locals and tourists are invited to join any of the Carnival parades taking place all over the city during these dates. More details on each of the parades can be found on Barcelona City Hall’s website: https://guia.barcelona.cat/en/llistat?tipuscerca=generica&cerca=carnival.

If you were hesitating whether Barcelona joins cities all over the world in celebrating Carnival, now you know the city does not find only a good excuse to celebrate, but also a great occasion to refresh our cultural roots.