Grapes and races: an alternative New Year’s Eve in Barcelona 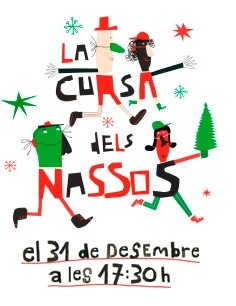 Many tourists look for apartments in Barcelona to spend New Year’s Eve in a Mediterranean vibrant city. Barcelona is a safe choice for a great New Year’s Eve party but visitors can also enjoy of other cultural traditions in their stay, such as eating twelve grapes for the year’s countdown or running in the last race of the year.

Barcelona is a city well-known for its lively and eclectic nightlife as well as for its good weather even during winter season. These are some of the reasons that make tourists choose Barcelona as their New Year’s Eve destination. However, travellers renting an apartment by the end of the year in the city can also enjoy other less known cultural traditions taking place on 31 December.

The final countdown: grapes and fireworks

The countdown to switch from one year to another is followed in Barcelona with as much excitement as in the rest of the world. As many other European popular cities, such as Paris or Amsterdam, Barcelona also offers beautiful fireworks to welcome the new year.
On New Year's Eve, a light, water and fire show will be offered from 23:30h on at Avinguda Reina Maria Cristina. This avenue offers great views to Montjuïc’s Magic Mountain, which will be turned into a giant clock through the lighting special effects. The whole celebration will kick off with institutional messages and a music and water show of the Magic Fountain of Montjuïc. Later, the official show will consist of live music accompanied by a set of opening fireworks and traditional devils fire dance.
Locals and visitors can post about the event on social media under the hashtag #holaBCN2016, which will be screened on-site.
Besides, any citizen living in Spain celebrates the final countdown in a peculiar way. Everyone has to eat twelve grapes in the last twelve seconds of the year –one per ringing bell-. This tradition, which started in 1909 due to a surplus in the production of grapes, is supposed to bring good luck for the coming year.

The "Nassos" Race: the Catalan touch

On 31 December a fictional character to scare children called “the man of the noses” is supposed to be out in the streets. The Catalan legend says that this man possesses as many noses as days in the year. Therefore, children are eager to look for a man who has 365 noses when in the end everyone is “the man of the noses” as there is only one day left in the year.
In line with this myth, Barcelona traditionally hosts since 1999 the “Nose Race”, just like many cities in the world host a race on the day of Saint Sylvester, the last day of the year. In spite of being an athletic race, the “Nose Race” has a festive character and most citizens run while wearing wigs or Christmas accessories.
Keeping the sporty spirit, Barcelona also hosts the “first bath of the year” on 1 January as a way to start the year in a healthy and energetic way in the Mediterranean Sea.

Where to party?
Barcelona offers a wide range of places and clubs to go to party on New Year’s Eve. Some of the most popular are Poble Espanyol, Razzmattazz, Sala Apolo or Sala Sidecar. Here you can check some of the parties to attend recommended by Time Out Barcelona (in Catalan): http://www.timeout.cat/barcelona/ca/club/les-millors-festes-de-cap-dany-a-barcelona