3 of the most historic tapas bars in Barcelona (and with a terrace!) 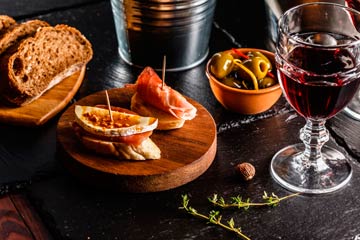 You may not get a free tapa with your drink in Barcelona like in other places in Spain, but Barcelona's people have certainly known how to make an art of the terraceo, which means having tapas outdoors.

For this reason, at Fisa Rentals Apartments we have decided to share with you this list of 3 of the most emblematic tapas bars in Barcelona. In addition, in all of them, You can be lucky and get a table outside, so do not hesitate to arrive early!

The best tapas bars in Barcelona

These are in the top 3 of the most coveted tapas bars in the city as for decades they are the favorite places of neighbours and, from now, also ours.

Barcelona would not be the same without its neighborhoods. Many of them are old villages who ended up being part of the city and still maintain much of its essence. The Quimet d'Horta is a familiar place of almost a hundred years old and located in one of those "Barrios" (neighbourhood in Spanish) with a capital letter.

What is it? a tavern with colonial air and a curious collection of 3,000 bottles on the walls.

What to order? any of the 37 different kinds of tortillas or any of their more than 85 varieties of chapatas.

How to get there: it is on Pl. D'Eivissa, 10, next to the Horta metro stop on the blue line.

These are the must-do: visit the Parc del Laberint d'Horta, with the oldest garden in the city and a true green labyrinth.

La Esquinica opened in 1972 at the crossing of Montsant street and Cadí street (the addition of the suffix "ica" at the name is because two of its owners were from Teruel, Aragón). The business was a success and it soon became common to see long lines of customers eager to taste their famous patatas bravas. To reduce the waiting time, a few years ago they decided to move to a larger place, which is what is today it’s located in the Paseo Fabra i Puig. During the relocation they have tried to maintain its essence and the best thing is that there is now a luxury terrace to enjoy the amazing weather of Barcelona.

What is it? A fixture bar decorated with tiles and field tools.
What to order? The patatas bravas are their specialty, but their faithful parishioners fervently recommend any of their tapas.

Phone number:  933 58 25 19
Practical information: open from Tuesday to Friday from 8am to 12pm, on Saturday from 8am to 4.30pm and from 6pm to 12pm, on Sunday from 8am to 5pm and closed on Monday.
How to get there: it is located in Passeig de Fabra i Puig, nº296, very close to the subway stop "Virrei Amat" L5.
These are the must-do : Walk up to the Torre Baró viewpoint from which you will enjoy a view of Barcelona or enjoy a walk to the Sant Andreu district and its mythical Orfila square. Close by there is also the textile factory Fabra y Coats, the Parque de la Pegaso or Casa Bloc (by appointment), one of the greatest examples of Catalan rationalist architecture.

One of the most classic, the Bar Tomás located in Sarriá district has won for many years the podium of the lists of the bars with the best patatas bravas in Barcelona. Located in the "zona alta" of the city, it is somehow more expensive than the other ones, but you won’t be disappointed by the quality. And if there are no tables available, we tell you a secret: the place at the corner room does not have a terrace nor is nice, but they serve exactly the same food, as they share the same kitchen!

What is it? the bar with the most mythical patatas bravas in the city.
What to order? In addition to the most typical ones, the empanadillas are another of their specialties. There is little variety on the menu but it is all very good.
Phone number: 932 03 10 77.
Practical information: open Monday to Saturday from 12am to 4pm and from 6pm to 10pm, closed Sunday.
How to get there: it is in carrer Major de Sarrià, 49, railway station of Sarrià.
These are the must-do ... walk up and down the Calle Major de Sarrià or reach the Monastir de Pedrables, founded in 1327.

They say that the entrance of La Boquería market is the most photographed image of Barcelona, ​​even more than the Sagrada Familia. The truth is that in this hundred-year-old market you can get to know a lot about the Catalan culinary culture. And what better than trying it too? We suggest whether the Central Bar, El Quim de la Boquería or a class of Catalan tapas and wines with a visit to the market.

What is it? Barcelona's most famous market worldwide, opened in 1840. In the surrounding bars you will find the most varied tapas made at the moment with the best ones of the day.
What to order? Ask the waiters to recommend their favorite dish (although you have to be careful with the price of the fish and shellfish that are not written on the menu).
Practical information: the Mercado de la Boquería opens every day from 8 am to 8 pm except on Sundays.
How to get there: it is on La Rambla, 91, in front of the Liceo metro exit of L3.
These are the must-do: walk down Las Ramblas from Plaça Catalunya and end up at the sea.